“If you listen to Ruben speak, your life will change.”

“Invite Ruben to speak to your group and you’ll be glad you did.”

– Zig Ziglar, Motivational Teacher, author of “See You at the Top”

A seemingly “ordinary guy,” Ruben Gonzalez wasn’t a gifted athlete.  He didn’t take up the sport of luge until he was 21. Against all odds, four years later, he was competing in the Winter Olympics. At the age of 39 he was racing against 20-year-olds in the Salt Lake City Olympics!

Ruben speaks from Olympic experience. He teaches the personal effectiveness system he used to achieve success again and again in both the Olympics and in business. 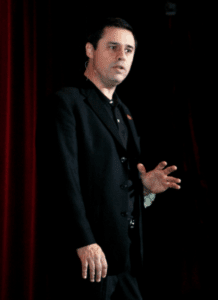 He is proof that ordinary people can achieve extraordinary things if they will follow a few simple steps. From Dubai to Dublin, from Coca Cola to the Make a Wish Foundation, Ruben has inspired and motivated audiences around the world.

As a Three-Time Olympian and a national luge champion, peak-performance expert Ruben Gonzalez knows how to achieve success again and again. A master storyteller, Ruben uses his Olympic experiences to inspire audiences to think differently, live life with passion and have the courage to take the necessary steps toward their goals – to push beyond self-imposed limitations and to produce better results!

Ruben’s appeared nationally on ABC, CBS, and NBC. He’s been featured in Time Magazine, as well as publications around the world. His articles on peak-performance are read on every continent. His book, “The Courage to Succeed,” has been endorsed by Stephen Covey, Ken Blanchard, Brian Tracy, and Dr. Robert Schuller. Mega best-selling author Jack Canfield features Ruben Gonzalez’s incredible story three times in his mega best seller, “The Success Principles.” Canfield uses Ruben’s story to illustrate three of his success principles; believing in yourself, taking action, and not procrastinating.

Ruben is fast becoming one of the most popular keynote speakers in America.

His client list reads like a Who’s Who of Corporate America: Dell, Coca-Cola, Farmers Insurance, Ortho McNeal, the Million Dollar Round Table, Oracle, Wells Fargo, Century21, and even the U.S. Treasury Department!

Ruben has spoken alongside speaking legends Zig Ziglar, Denis Waitley, and Tom Hopkins. They’ve hailed him as a leader of a new generation of personal development speakers.

Now he’s ready to speak at your next event!

Armed with the same energy and dedication that he put into his athletic career, Ruben Gonzalez brings to audiences of all sizes and backgrounds a truly unique, truly memorable performance that teaches as it entertains, and inspires as it motivates.

Because of his powerfully inspiring story, Ruben was selected to carry the Olympic Torch at the Salt Lake City Olympics.

Ruben is the best selling author of the highly acclaimed books “The Courage to Succeed” and “Becoming Unstoppable.”

Ruben co-stars in the motivational movie “Pass It On” where he was asked to share his  insights on what it really takes to succeed at work and in life.

He’s a frequent TV and radio guest, and his column “High Achievement” appears in major publications across the nation.

He delivers over 90 presentations a year to organizations and corporations around the globe about taking action to create long lasting success.

Ruben will inspire and equip your people to achieve more than ever before.

Ruben’s story of overcoming incredible challenges on the road to competing in three Olympic Games over the span of three decades goes right into the core of his audiences psyche, filling them with the inspiration and self belief they need to achieve their goals.

People walk out of Ruben’s keynote presentation knowing they have what it takes to achieve sustained success.

Ruben is training for the 2010 Vancouver Winter Olympics. When he competes in Vancouver, at the age of 47, he will become the first person EVER to compete in four Winter Olympics in four different decades.

Ruben’s found the formula for sustaining success. As your people listen to Ruben’s story, they’ll learn what it really takes to get to the top and more importantly, once they are at that level, how to sustain it year in and year out.

He will change you. He’ll inspire your people to reach their full potential, to make bold decisions and to take action – creating long lasting success for your organization.

His incredible story will inspire your people to excel. Ruben will move your people showing them what is possible if they will make a decision to commit fully to their goals.

Ruben takes people’s excuses away so they can become everything they are capable of.

“If you will listen to Ruben speak, your life will change.” – Lou Holtz – Legendary Notre Dame Football Coach

Best of all, Ruben’s program is completely original. You won’t hear him retelling old worn out stories about Radio Shack, McDonalds and breaking the four minute mile.