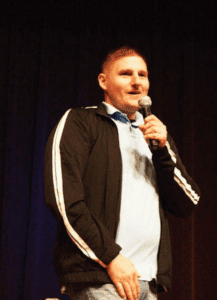 Since June of 2014, Ryan Orbin has faithfully served with Eyes On Me. Willing to serve in any capacity, he is open to God’s direction in his life and will go wherever God calls him. Currently, Ryan lives in our Mission House in Brookshire, fulfilling the role of mission director in this under served community.  Also, Ryan organizes all Eyes On Me outreaches to the community and is a welcome presence in the Brookshire-Royal School System where he teaches a weekly character development class in the Alternative School.  Ryan is heavily involved in the mentorship of many at risk youth in the area. He has even become a big brother/guardian to Will, an 18 year old Senior at Royal High School who has grown up in “the system” and lived in homeless shelters, foster homes, and youth detention centers. Just when it seemed as though everyone had given up on Will, Ryan took him in. Now, Will has grown dramatically. He is set to graduate in May of 2016 and then plans to join the military.

The Godly and missionary lifestyle Ryan currently lives is a far cry from the way he used to live.  Although raised in a loving home with a wonderful mother and a loving stepfather, he became heavily involved in drugs and alcohol at the age of seventeen. For the next seventeen years, Ryan lived the life of an addict, addicted to a variety of drugs, primarily methamphetamine.  Consequently, his addiction resulted in Ryan’s incarceration in military prison. Furthermore, Ryan received a Bad Conduct Discharge out of the United States Air Force and was arrested several times after leaving prison. The final arrest ended with him being tasered by the police after trying to evade arrest on foot.  This “shock therapy” woke Ryan up to the reality that he desperately needed a savior, and he cried out to Jesus in the holding tank of the Harris County Jail. Faithfully, God answered.  After an eight month stay at The Manna House Recovery and Restoration Center in Brookshire, Texas, Ryan began serving with the Eyes On Me ministry where he would set up and tear down for weekly Hip Hop Hope outreaches in the community.  After seeing his heart to serve, Tre9 asked him if he would like to come on board and reside in The Mission House in Brookshire where he has lived ever since.  Ryan is 36 years old and is currently engaged to be married this December. After marriage, his new bride will move into The Mission House with him where they will serve the community of Brookshire together.