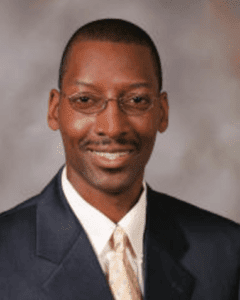 Hollis Conway has been one of the world’s most dominating athletes. He has numerous awards and set many records. His 1991 jump of 7’10.5″ still stands as the American Indoor Record some 17 years later. He is a faithful husband, a father, and an Ordained minister. He is also the president of Overcoming Obstacles, Inc., a non-profit motivational speaking company. Hollis has authored two books: YES I CAN and GRASSHOPPER.

Born in Chicago, Illinois, Hollis is the baby of seven children. His mom and dad often separated which caused them to move quite frequently. At the age of two, Hollis and his family moved to Detroit, Michigan and at the age of nine, they moved to Shreveport, Louisiana. With so much instability at home, Hollis quickly found solice in the athletic arena. He tried basketball and football but it was in the high jump that Hollis found his mark. While not being able to clear 5’6″ as a freshman, he was just a junior varsity jumper. However his remaining years in high school saw him go from that JV jumper to one of the best high jumpers in the United States. Hollis eventually went on to have a 16 year career and is going to go down as one of the best high jumpers in all of history.

Since he retired from jumping in 2001, Hollis has taken the same drive, dedication and determination that he used to become the number one jumper in the world, to the world of motivational speaking. From school assemblies to corporate meetings to all kinds of church events, Hollis is truly inspiring a generation.