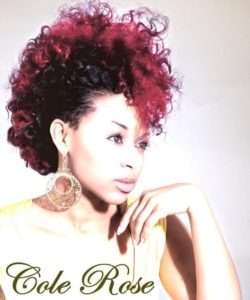 Cole Rose or simply “Nikki” to close friends is an all around entrepreneur. A speaker, writer, pop singer, actress, stylist, and founder of The D.O.P.E. Movement (Driven On Positive Energy) Artist Outreach Program, as well as owner of her own Online Store, Rose definitely fits the bill of her line name “Renaissance.” After pledging into the Eta Beta Chapter of Delta Sigma Theta Sorority Inc. at Prairie View A&M University, Cole Rose graduated Cum Laude with a B.S. in Psychology and minor in Criminal Justice. Having a hard time running from her true passion of entertainment, she then went on to pursue and sign her first major deal at J records with female quartet, Gyrlfriend, which later became the Trio, Sophia Fresh. After 2 years on the label, the trio made a new home at Atlantic Records.

As 1/3 of the unparalleled trio Sophia Fresh (led into the music game by T-Pain (NappyBoy) and Atlantic Records, Cole Rose brings forth that “spitfire” personality as her contribution to the group! Sophia Fresh debuted in their first song, “Lives In Da Club”, on Disney’s soundtrack for the film Step Up 2: The Streets, which was released in February 2008 with a follow-up single (“This Instant”) in the trilogy Disney Movie Step Up 3D. In November 2008, Sophia Fresh released their debut single, “What It Is”, featuring Kanye West. Cole also co-wrote on a song entitled “BIG” by Actor/Comedian/Vocal Artist Brandon T. Jackson for the feature film Big Mommas House 3.

To add to her collection, Cole Rose wrote a mini play entitled “God’s Will To Heal. ” This play was inspired by her mother Karen Rose, who is a breast cancer survivor, and was for a breast cancer awareness event. Cole Rose has also appeared in various plays such as:

Cole Rose has also made appearances on Worldwide Music video productions such as T-Pain’s Chopped-n-Screwed as the main video model, and has made appearances on BET’s 106 and Park. Cole Rose is a trained dancer and has attended Barbara Jean Crow School of Dance and Ruth Elgin’s school of dance, where she studied tap, jazz, ballet, and hip-hop dance. Cole has been under the training of professional choreographers such as Sakina Lestage (T-Pain, Ne-Yo) as well as Luam (P.diddy. Dawn Richard), and Brandy P. (Fergie).

Cole Rose has won a host of awards including the 2014 Best Female Artist of the year for The Holy Hip Hop for Hunger Awards and also in 2015.
“As the world moves forward, so does a burning desire inside of me to share all of my gifts with it!” says Cole. When it comes to her artistry as a whole, Cole believes in bringing forth artwork from the soul, using the circumstances around her as artistic expressions. “Often times I run into people that are afraid to speak up, so I choose to stand in the gap and do so for them! It’s all Love!” says Cole Rose.